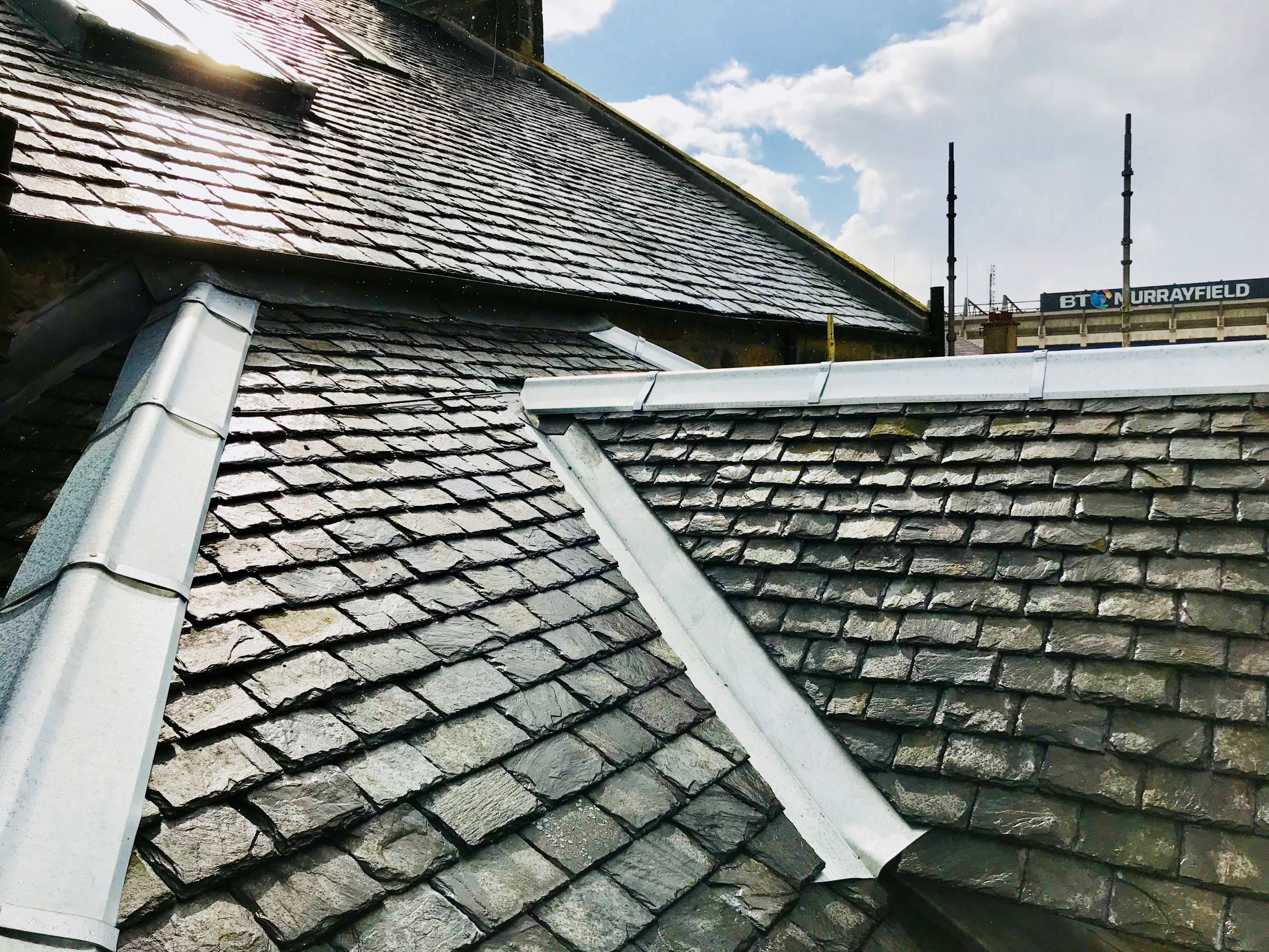 Following over 10 years of maintenance, the roof became in need of replacement.  The roof was becoming tired and developing nail sick risking the integrity of the roof.

As we were already familiar with the roof we were able to provide a full specification of the works required and quote to the client.

The full slate roof was renovated including new lead Watergates and flashing to the quoted time and costs.

Advanced Roofing has maintained the roof of this Roseburn Street home for many years.  The roof was getting very tired and nail sick was developing prompting the replacement of the slate roof. 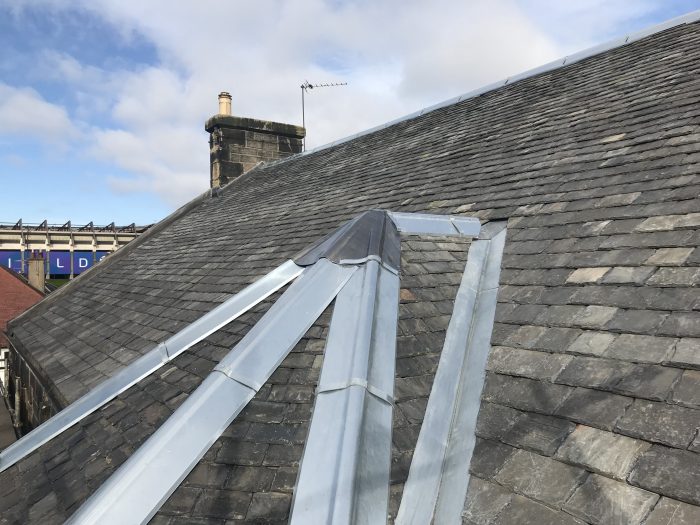 The roof assessment included costs and timescale for the roof to be stripped and re-slated, replace skews with lead Watergate and flashing, replacing cast iron rhones and repainting of the rhones and downpipe.

We began the work by erecting scaffolding all elevations. 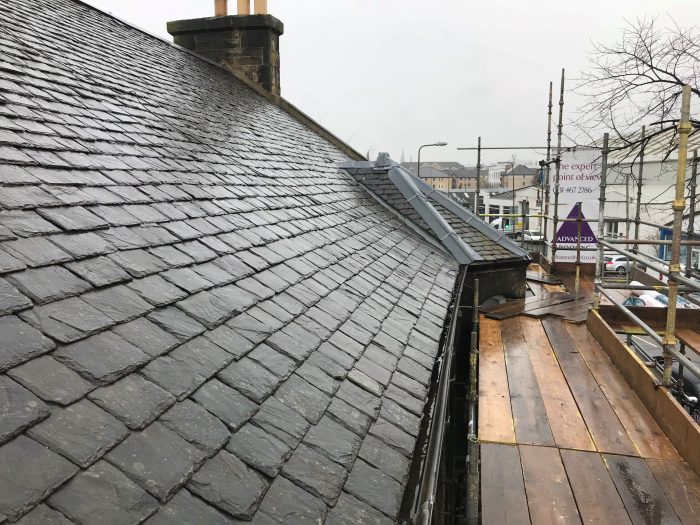 As this is a heritage building Advanced Roofing sourced second hand scotch slate to replace like for like.

The works began with the removal of the slates and corroded nails and fixings.

Having stripped the roof a single breathable underslating membrane was added.  This was added to provide an additional water-proof yet breathable layer to further protect the roof before reslating.

During the works, the ‘Beast from the East’ arrived in Edinburgh halting the works.  We managed to keep the roof watertight by the addition of the single breathable understating membrane.  This is a testament to the quality of the materials that we use.

When work resumed we were able to re-slate the roof with the sourced second-hand Scotch slate. 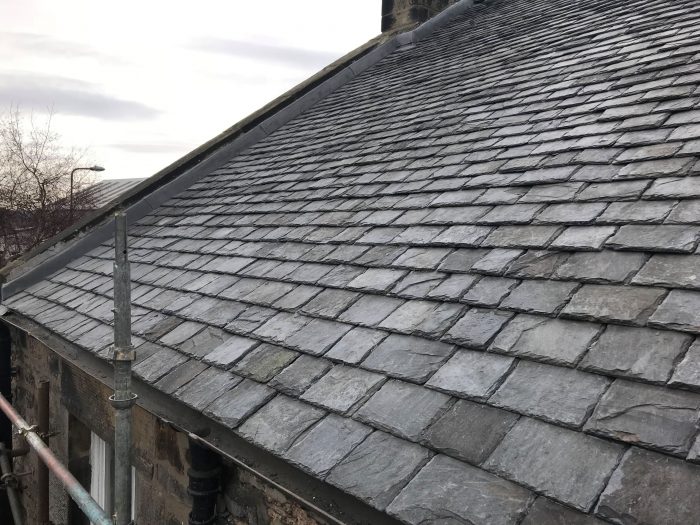 There were defective skews which were also removed and replaced with a long-term solution in a lead Watergate and flashing detail. 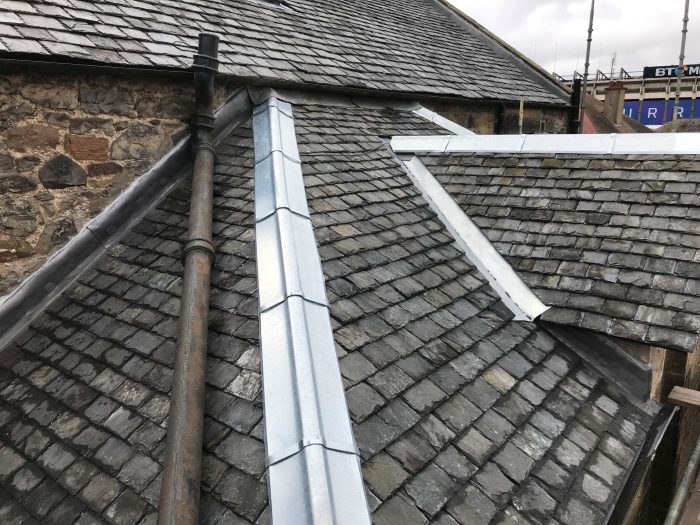 All the cast iron rhones were removed and replaced with matching cast iron.  The rhones were then painted along with the downpipe to give an aesthetic finish. 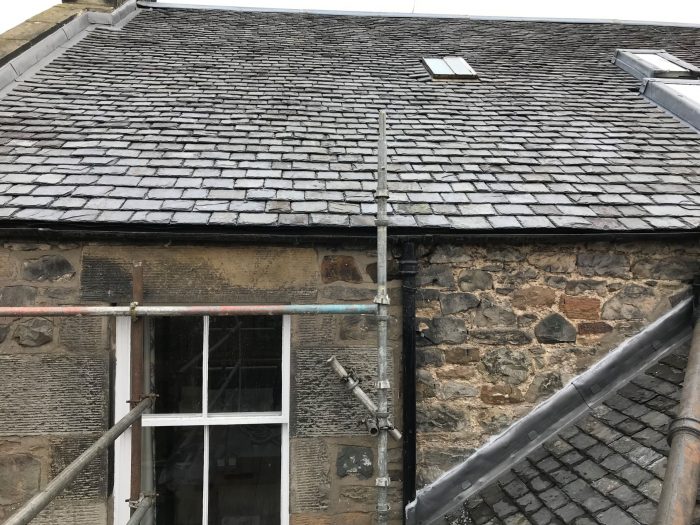 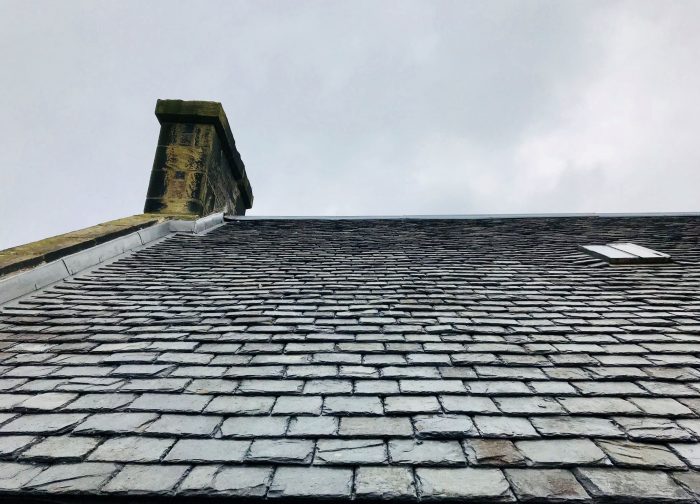 Having lived in a large mid-Victorian house for nearly twenty years and used to our annual maintenance bill of replacing so many slates or a concrete skew or two we decided this year to renew the whole thing with the addition of lead skews. The scaffolding went up and the work force and skip arrived and no sooner had the slates been removed from the rear of the building then the Beast from the East arrived. However with the waterproof underlay applied directly after the slates were removed – we had no leaks – amazing considering the thick snow lay on some areas for over two weeks.  We found the team of roofers always good-natured whatever the weather and the lead workers highly skilful. A job well done. We are very happy with the finished product and after a storm such as storm Ali, every slate has stayed in its rightful place. If you have an old roof with nail sickness or porous tiles – take the plunge, call in Advanced, for peace of mind.