Pitched roofs are often clad in either slate or tiles (Glossary).  These terms are often used interchangeably but there is a difference between the two.  Slates are made from natural stone and typically grey in colour.  Whereas tiles are manufactured and can be in a range of colours.

Slates and tiles are layered in a slope to direct water from the roof apex down to the valleys and guttering.  Each slate or tile is fixed to the roof by a nail with ridge tiles used for the roof junctions.  There may also be chimneys, vents and windows that feature on your roof.  Guttering and downpipes are also elements of your roofing infrastructure.  Due to these numerous components to a slate or tiled roof there are several areas of maintenance required to keep the roof watertight.

At Advanced Roofing all our roofing technicians are trained to CITB Advanced City and Guilds level (Glossary) in pitched roof slating and tiling.  We have a wealth of experience working on slated and tiled roofs across Edinburgh city, the Lothians and Borders as well as further afield across Scotland.  We offer a minimum 10 year guarantee on all of our pitched roof slating and tiling systems.

Many of Edinburgh’s rooftops were clad in slate over 100 years ago. This means that many old slate roofs now require complete re-roofing. This is due to either slates becoming porous and soft or the fixing nails rusting and failing known as nail sickness. In addition, when these roofs were first built the slate was fixed directly on the roof timbers. When re-roofing we install a breathable waterproof membrane that provides a further level of protection to the roof. Each roof is different which is why we carry out a full roof review to provide a free estimate to our clients. This way we can clearly identify the areas of concern and the best approach to remedy. 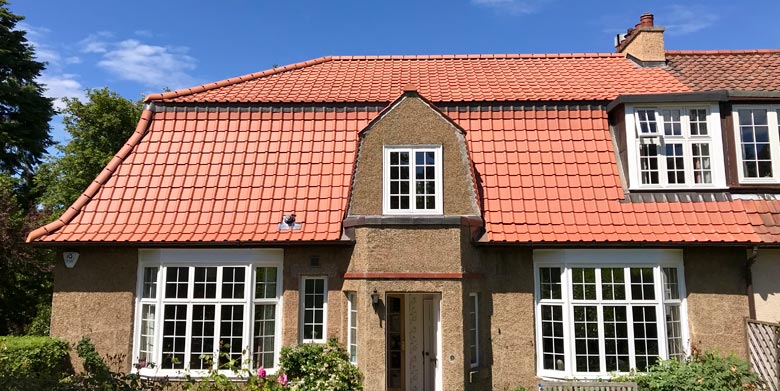 Tiled roofs can be found on a range of properties from new builds to 1960’s renovations replacing old slate. Tiles work in a similar fashion to slate with the difference that they are manufactured rather than natural. Tiles do have a lifespan depending on the material the tiles have been manufactured from.

Tiles are typically fitted and supported by timber battens which can suffer from degradation. At the point where the roof timbers fail this would require complete renewal of the roofing system. When we replace roofing systems we install a breathable waterproof membrane and new pressure treated timber battens to fit the new tiles.

There are many options when it comes to tiles. Roof tiles can differ greatly in size, colour and profile. Interlocking tiles are made from concrete. This means that the tile is uniform in height and width. There is also a choice of colours and profiles available. Plain tiles are uniform in height and width, again with multiple colours available. Plain tiles tend to be smaller in size than of large concrete tiles. Clay tiles are most commonly manufactured in an orange red colour. Again, these tiles are uniform in size and can be made in multiple colours and profiles. Read more...

Our customers satisfaction is of the upmost importance to us. Who’s best to tell you about our customers and their experience using Advanced Roofing? We believe that it is the customers themselves. We have worked with Advanced Roofing for many years. They would be our default go-to contractor for all types of roofing projects. Advanced

We have used Advanced Roofing for over fifteen years over two old properties in Edinburgh. Both houses needed very substantial roof works and Advanced did an excellent job in replacing one roof and carrying out very substantial repairs to the other. We have always found them courteous, prompt and easy to deal with whilst they

From start to finish Alan, and his team (at the office and on site), were responsive and professional. Whether it was providing the quote, to discussing issues that arose on site, or being on site when they said they would be. The end result is a new roof and pristine pointing on our Victorian house

Having lived in a large mid-Victorian house for nearly twenty years and used to our annual maintenance bill of replacing so many slates or a concrete skew or two we decided this year to renew the whole thing with the addition of lead skews. The scaffolding went up and the work force and skip arrived

A contractor must give me quality, value and reliability. Advanced Roofing fits the bill.